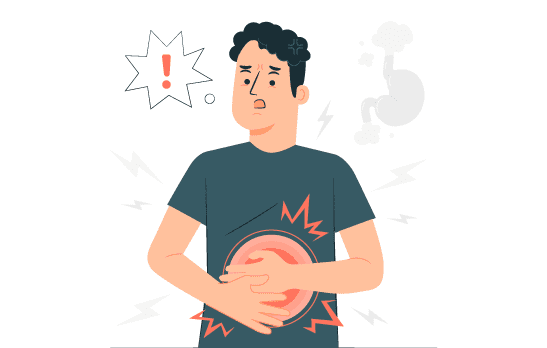 What are gallstones?
Gallstones are hard, pebble-like pieces, usually made of cholesterol or bilirubin that form in the gallbladder. Gallstones vary in size, ranging from the size of a grain of sand to a golf ball. A gallbladder can form hundreds of tiny stones, one large gallstone, or both small and large stones.

The gallbladder is a small organ in the upper right part of the abdomen, just below the liver. It's a small sac that contains bile, a greenish-yellow liquid used for digestion. Gallbladder problems usually occur when gallstones block the bile ducts in the biliary tract. This can cause sudden pain in the upper right abdomen, also known as a gallbladder attack or biliary colic. Gallstones can cause serious complications if symptoms persist and are not treated.

In general, most gallstones do not cause obstruction and are painless. These types of gallstones are also called "silent" gallstones and usually do not require medical treatment.

Gallstones are mainly of two types: Cholesterol and Pigment gallstones

The yellow-green coloured stones are made of mostly hardened cholesterol. Cholesterol stones make up about 75% of gallstones in some countries.

Made of bilirubin, pigment stones appear dark in colour. It's common for people to have a mix of both kinds of stones.

Gallstones can cause pain in the upper right abdomen or in the middle of the stomach. Eating higher fat foods like fried foods can cause gallbladder pain from time to time. Gallstones issues can cause pain that usually lasts for only a few hours, however, it can feel severe. If gallstones are not treated or unidentified, the symptoms may increase to include:

Gallstones themselves do not cause pain. Instead, the pain arises when gallstones blocks the movement of bile from the gallbladder. The "silent gallstone" is found in about 80% of people with gallstones, indicating they don't experience any pain or symptoms. In these cases, the doctor can discover the gallstones through X-rays or during abdominal surgery.

Gallstone Risk Factors
There are many factors that could lead one to get gallstone, such as:

Too much cholesterol in the bile:

Hard stones are formed when the liver produces more cholesterol than the bile can dissolve. These yellow cholesterol stones can be caused by having too much cholesterol in the bile.

Too much bilirubin in the bile:

When the body breaks down the red blood cells, a chemical called Bilirubin is produced which passes through the liver and is eventually excreted out of the body. Health conditions such as liver damage and certain blood disorders cause the liver to produce more bilirubin than it needs. When the gallbladder is unable to break down excess bilirubin, it can lead to pigment gallstones, which are often dark brown or black in colour.

Concentrated bile due to a full gallbladder:

In order for the gallbladder to function properly it must be able to empty its bile and when this fails the bile becomes too concentrated leading to the formation of stones.

Health professionals will perform a physical examination that includes checking for visible colour changes of eyes and skin. As a result of too much bilirubin in the body, a yellowish tint may appear as a sign of jaundice. The exam may involve using diagnostic tests, like:

Taking lab tests is common when diagnosing gallstones. A blood sample of patient is sent to a lab to test. The blood test results can determine signs of infection or inflammation of the bile ducts, gallbladder, pancreas, or liver.

Ultrasound An ultrasound produces images of the abdomen. It’s the preferred imaging method to confirm if a person has gallstones. Additionally, it can show abnormalities related to acute cholecystitis.

For a detailed examination, a health professional will use MRI machines to get clear images of the organs and soft tissues without x-rays. A doctor uses MRI to look for gallstones in the biliary tract.

Cholescintigraphy—also called a hydroxyl iminodiacetic acid scan, HIDA scan, or hepatobiliary scan—uses a safe radioactive material to produce pictures of the biliary tract. In this procedure, a healthcare professional injects a small amount of the radioactive material into the patient’s vein in the arm. The healthcare professional may also inject a substance that causes the gallbladder to squeeze. A special camera takes pictures of the radioactive material as it moves through the biliary tract. Doctors use cholescintigraphy to diagnose abnormal contractions of the gallbladder or a blockage in the bile ducts.

For the treatment of the bile and pancreatic ducts, ERCP integrates upper gastroendoscopy and x-rays. Through ERCP, the health care professional can easily locate the affected bile duct and the gallstones. This test is more invasive or involves more instruments inside the body than other tests. Doctors opt for ERCP when they have to remove a gallstone that is stuck in the common bile duct.

Most often gallstone issues don't need treatment, unless they cause pain. Sometimes, gallstones pass without even noticing. If the pain is severe, the doctor will likely recommend surgery. Based on the case and health situation, the doctor may recommend some medication. Besides surgery, there are also a few nonsurgical ways to treat gallstones. However, if surgery isn’t performed, the gallstones may come back even with additional treatment. This means one may need to keep an eye on his/her condition for the majority of his/her life.

One can live a healthy life without having gallbladder in the body as it isn’t an essential organ. The gallbladder removal is done through cholecystectomy surgery which is a common surgery for the procedure.

There are two types of cholecystectomy:

It is one of the common surgeries that involve general anaesthesia. The surgeon begins with three or four abdomen incisions and proceeds with an insertion of a small, lighted device into one of the incisions to check for stones, and carefully remove the gallbladder. The patient can usually go home on the day of the procedure or the day after incase of no complications.

Open cholecystectomy is performed when the gallbladder is inflamed, infected or scarred. If problems occur during a laparoscopic cholecystectomy, the surgeon may opt for this procedure. Post gallbladder removal, the patient may experience loose or watery stools. The procedure of gallbladder removal involves rerouting the bile from the liver to the small intestine. Bile fails to go through the gallbladder and it becomes less concentrated. The immediate result is a laxative effect that can cause diarrhoea, but this issue should resolve on its own for most people.

In case performing a surgery is not an option due to high risk, age or pre-existing diseases, doctors opt for a few other ways to get rid of gallstones:

It typically includes using the medications ursodiol and chenodiol to break up gallstones. These medications contain bile acids, which help stones to break up. This treatment is best suited for breaking up cholesterol stones but can take many months or years to work completely.

An alternate option is shock wave lithotripsy, which involves a machine called a lithotripter to generate shock waves that pass through a person. The shock waves produced by the machine can break gallstones into smaller pieces.

Percutaneous drainage includes placing a sterile needle into the gallbladder to aspirate (draw out) bile. A tube is inserted for the additional drainage. This procedure is unlikely to be chosen as the first line of defence and tends to be an option for individuals who may not be suited for other procedures.

How can Livocumin help you with Gallstones?

Livocumin consists of excellent ayurveda herb Yavakshara that helps in maintaining the homeostasis of bile in the gall bladder that prevents further progression of the disease.

Livocumin is a hepato-protective stimulant that detoxes, repairs and strengthens the liver. The all-natural formulation of Livocumin makes it a reliable anti-oxidant and anti-inflammatory medicine to aid the detoxification processes of the liver.