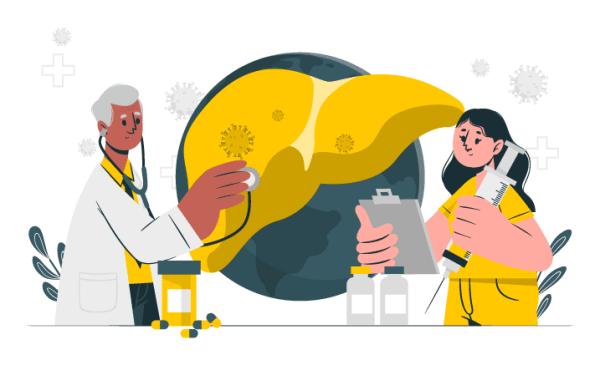 Hepatitis E is a viral liver infection that is caused by the Hepatitis E Virus (HEV). It inflames the liver causing swelling and scarring of the liver tissues. This causes severe liver damage that may give rise to different diseases if not treated in time. Hepatitis E affects people of all age groups right from infants to older adults.

Hepatitis E has 4 known variants that are named Genotype 1, 2, 3, and 4. While Genotypes 1 and 2 have been found only in humans, genotypes 3 and 4 are detected in several animals like pigs, deer, and wild boars. Genotype 3 and 4 circulates within these animals and very rarely pass on the infection to humans.

It is a very common disease in developing countries like East and South Asia, Central America, the Middle East, and parts of Africa. It spreads mainly via the fecal-oral route which is when one comes in contact with the feces of an infected person or with the water that is contaminated with the infection.

Other types of HEV are spread through eating undercooked pork, venison, wild boar meat, or shellfish and are very common in countries like the USA, Japan, Australia, and parts of Europe. Hepatitis E causes an acute infection that recovers within 6 to 8 weeks of infection, but in cases of weakened immunity, the infection may go on to the next stage which is a chronic infection, but the occurrences are rare.

Currently, there are no effective vaccines to stop the spread of the Hepatitis E Virus. The only way to put a halt to its transmission is by practicing hygienic practices, having access to clean drinking water, and consuming well-cooked food.

Hepatitis E is common in developing countries where sanitation and hygienic practices are limited, and access to clean water is difficult. Here, the disease occurs as both outbreak and sporadic cases.

Outbreaks occur due to contamination of drinking water with the fecal matter of an infected individual and may be consumed by thousands of people without knowing they’re infected. The most common example of an outbreak is war zones and camps for refugees where access to clean water, sanitation, and hygiene are limited.

In the case of sporadic infections, it occurs in the same way, that is contaminated water, but on a smaller scale. The areas in which access to sanitation and drinking water is better, the prevalence of Hepatitis E is under control, with only infrequent sporadic infection.

Who is at risk of developing Hepatitis E infection?

Everyone, from young children to adolescents to adults is at risk of developing Hepatitis E Virus infection.

Different genotypes are known to infect different groups of people. In developing countries, there is a high chance of genotype 1 and 2 escalation and infecting adolescents and young adults. While in developed countries, genotype 3 is most commonly infecting older males.

Once infected, there are no clear symptoms that indicate one is infected and hence can spread the virus to thousands unknowingly.

A majority of times, people with a robust immune system win over the infection within weeks of infection. But immunocompromised people, who have low immunity or are recovering from surgery and trauma might take a while to defeat the virus. In rare cases, the infections go on to become chronic, affecting the liver and damaging it.

How does Hepatitis E Virus spread?

Hepatitis E virus is found in the excreta of the infected person and spreads when someone ingests it in extremely minute amounts.

In developing countries, where access to clean drinking water and sanitation practices are limited, the spread of Hepatitis E is prevalent and the most common route is fecal-oral that is via consumption of contaminated water.

What are the symptoms of the Hepatitis E Virus?

Hepatitis E does not show any distinct symptoms until it is very late. The first signs of infection are seen in 3 to 4 weeks after being infected.

In areas where Hepatitis E is common, some adults may show signs after the incubation period but children are often asymptomatic and only show signs of jaundice.

Some of the common symptoms of Hepatitis E virus include:

What can help against Hepatitis E Virus Infection?

At present, there is no effective vaccine for Hepatitis E infection and the symptoms may take months to be noticed. The chances of HEV becoming a chronic infection are limited but not zero. Hence, taking precautions is necessary.

In conditions like this, it is advised to practice safe and hygienic activities, drink clean and contamination-free water and consume well-cooked meat to reduce the infection rate.

AFD Pharma's Livocumin liver tablets are the best ayurvedic liver supplements that help in protecting the liver against a large number of liver disorders like fatty liver disease, jaundice, gallstones, and viral hepatitis types like Hepatitis A, B, C, D, and E.

Livocumin is a liver tonic that possesses hepato-protective, antioxidant, and anti-inflammatory properties by protecting, detoxifying, repairing, and strengthening the liver. The all-natural formulation of Livocumin makes it a reliable ayurvedic liver medicine that aids the detoxification processes of the liver.